We are very sorry to hear that Mike Hayler of the Brighton Mitre CC died on 4th November at the age of 86. Mike was a member of our London South District Committee for longer than anyone can remember until retiring at the end of 2011. The following short tribute is from his clubmate Robin Johnson:-

He was promoting events for the Sussex CA as early as 1957 and did a few 100’s in the 1990’s for us. He was also in charge of CTT London South club events for 21 years before computers came along. He was a really good guy who marshalled a lot even though he ceased riding a bike in 1965.

Perhaps his proudest moment was the 2011 E.S.C.A. 24, organised by him, including the National Championship when a field of 98 riders saw Andy Wilkinson achieve a new competition record of 541 miles in not ideal conditions.

Mike was a great family man, thought the world of his wife, Jean, and was so impressed by everything his sons did.

Mike’s funeral will be held at the Eastbourne Crematorium on Monday 21st November at 1:45pm. 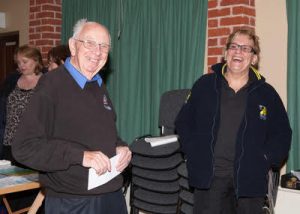